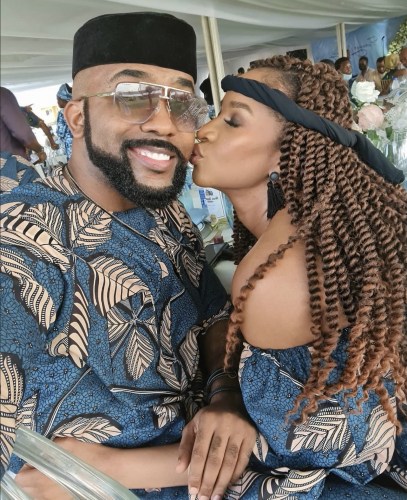 Wizkid, Banky W, and his wife, Adesua  are currently trending because of an interview they did and talked about Wizkid.

You would recall watching clips of Banky’s interview with Bounce (Hosted by Ebuka) where he talked about his current relationship with Wizkid and how things ended up between them. Banky  also revealed that Wizkid still owes EME records 3 albums.

The interview triggered a lot of Wizkid’s fans, especially with Adesua supporting her husband. The occasional ‘hmms’ and ‘Yes’ she was doing provoked them because they took to Twitter to drag her for contributing to an issue she knows nothing about.

According to many, Adesua wasn’t dating Banky W when Wizkid got signed and left EME. They claim she has no right to contribute to something she wasn’t actively involved in.

The more sensible ones reminded the first group that Banky W must have told her about it, but it is still a one-sided story with Adesua only hearing only Banky W’s side.

Read their comments below