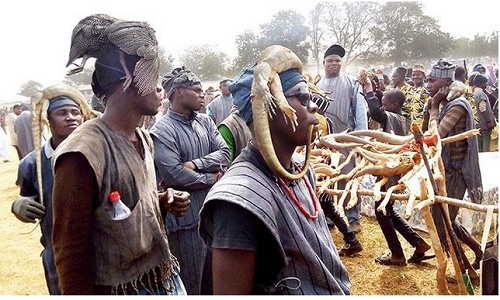 The Nigeria Police Command in Osun state has arrested a hunter, who allegedly shot and killed the 78-year-old Imam of Alaguntan village in Orile-Owu, Aiyedaade Local Government Area, whom he mistook for antelope.

The command’s Spokesperson, SP Yemisi Opalola, made this known during the parade of criminal suspects at the state police headquarters in Osogbo on Tuesday.

“On April 17 2022, at about 11:30 a.m, a complainant from Ogbere Oloba area of Ibadan reported at a police station that his father, one Adegun Yusuf, 78, the Imam of Alaguntan village in Orile-Owu, was shot dead by a hunter from the same village.

“The suspect was later found and arrested and he confessed to the alleged crime.

“He (the suspect) explained that he was on a hunting expedition when he saw an antelope in the bush, which he shot at with his Dane gun, but that he was surprised when he went to pick the antelope and met Baba Imam on the ground lifeless.”

Opalola said that the suspect would be charged to court after the completion of investigation.