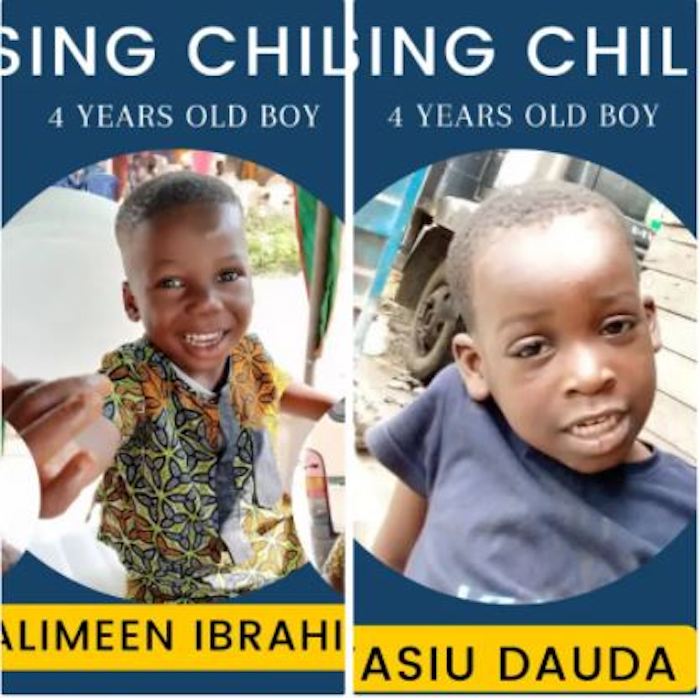 A man was said to have lured them into a tricycle and whisked them away while they were playing around their vicinity.

Two young children who have been identified as Wasiu Dauda and Al-Ameen Ibrahim, have been reportedly kidnap in the Ijesha area of Lagos.

Daily Trust reports that the little boys, both four years old, were discovered missing around 4pm on Friday, two hours after they returned from school.

A man was said to have lured them into a tricycle and whisked them away while they were playing around the vicinity.

This is coming hours after a dispatch rider in Lagos was nabbed with a baby in his courier box and a few days after Oluwabamisaye Ayanwola, who got missing in a Bus Rapid Transit vehicle, was also found dead.

One of the parents of the missing boys, Awau, told our correspondent that her son, Wasiu and Ibrahim had left home after having launch to play with their peers.

She said one Sunday, 10, who is the oldest among the group, told them that a man took the two boys away on the pretext of buying gifts for both of them.

“The children came back from school around 2pm on Friday. They ate and went out to play. After some time, I saw Sunday and asked him about Wasiu and Al-Ameen’s whereabouts. He said he left them at where they were playing.

“After about an hour, Al-Ameen’s mother rushed to me and said she was looking for her son. I told her she should go and look for him and that they would soon come back home. I became worried when I didn’t see Wasiu 30 minutes later.

“Sunday told us that one man asked them to follow him to where he would buy biscuits for them but he declined. A mallam who sells confectionery within our area said he saw both of them enter a tricycle. They are both four years old.”

Al-Ameen’s father, Kazeem, said he knew about the incident around 7pm and after searching around to no avail, he reported the case at the Ijesha Police Station.

“Around 7pm on Friday, his mum was looking for him and I asked her to check his friends’ houses. It was later we knew that a man led them to buy biscuits. We learnt that the mallam sold biscuits to them and they were led into a tricycle. I reported to the police yesterday (Friday) but they said I should report officially after 24 hours to lay the complain.”

The Police Public Relations Officer in the state, CSP Adekunle Ajisebutu, said a search party had been organised to look for the missing boys.